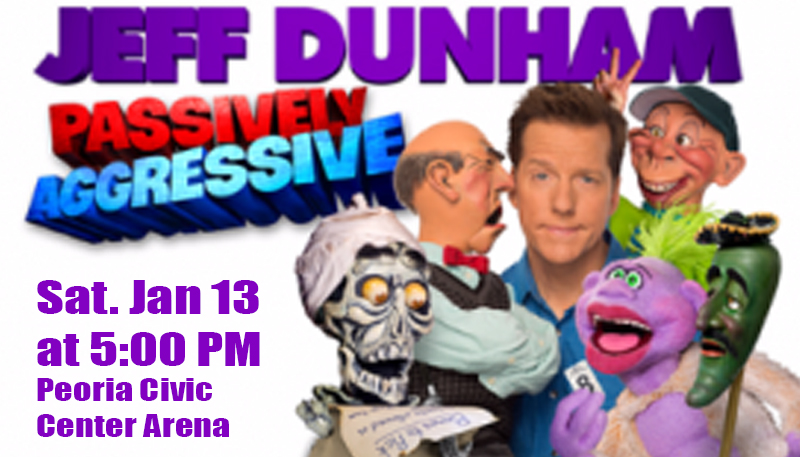 Record-breaking, global comedy superstar, Jeff Dunham, is bringing his cast of characters on the road this fall through spring 2018 as America’s favorite ventriloquist tours North America on his 60-city Passively Aggressive tour.  Tickets on sale now at jeffdunham.com.

Dunham just released his latest standup special, Jeff Dunham: Relative Disaster, on Netflix this month. The special features Dunham along with his ill-behaved and slightly demented posse of characters for a gleeful skewering of family and politics. Dunham and his famous cohorts Walter, Achmed the Dead Terrorist, Bubba J, and Peanut also consider what a new member to their already dysfunctional family could mean, putting the ‘relative’ in Relative Disaster.

Dunham, a Guinness World Record holder for “Most Tickets Sold for a Stand-up Comedy Tour,” has built an entertainment empire over years of non-stop touring and innovation. With over a million YouTube subscribers amassing over a billion views, he has carved out his own unique space in the comedy world leading to record-breaking viewership with his comedy specials on Comedy Central and NBC. His 2015 standup special, Jeff Dunham: Unhinged in Hollywood, debuted on NBC Primetime in the fall and ranked as the time period’s top non-sports program on the Big 4 in every key measure.

For more information about Jeff Dunham, visit his website, jeffdunham.com